Something I've had to relearn recently, is that when it comes to creating a photograph, the most important influence in how it turns out is the way you choose to see things.

Case and point. I recently had the pleasure & honour of watching photographer Lara Jade on the shoot which produced this image:

And the most interesting thing was, if you'd given me the camera, same lens, settings and model, my picture would 99% probably come out looking totally different (and hella crappier, because Lara is PHENOMENALLY talented).
But most of all, it'd be different because of the vision we have is different. 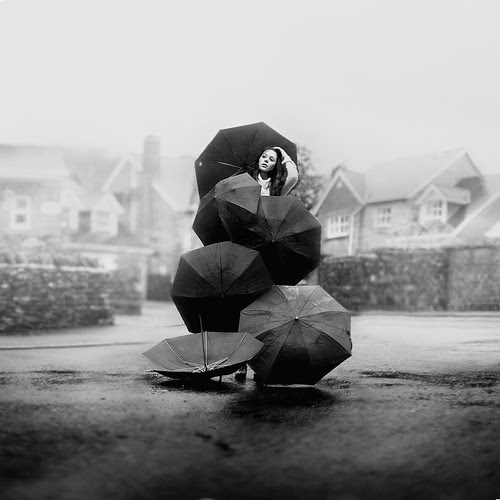 Another way of looking at it is this - the way we all see things is completely determined by every teeny tiny bit of data we have ever witnessed (be it online, in person, in films, combined together, mixed up) - it's all jumbled together and it's a big blobby mess that we like to call our imagination ('least thats the way I like to look at it).

Here's the making of: This is the image I began with.
Step 1 for me is always to think in square format, so that's always my first step.

I took sections of other photographs to create the buildings on either side, I had to use careful cloning and transforming to build walls when I had none and I hacked the roof off the house to the left. To create perspective, I stole blurry ground from the bottom of another photo and composited onto the original. Whilst shooting I moved the umbrella around into about 20 different places. I didn't bother to create any with shadows as I am lazy and it was raining, so I did that afterwards in GIMP. Here's the final shot after doing some misting in GIMP. The smoke I took in the shots didn't comp in well, so I used a stock image of mist and another of a sky and blended it all together.

I liked the colours in this, but I liked it in black and white even more so I altered contrast and tones and left it at that.

Reasons why I did what I did:

Working with square crop helps me focus on composition, I find it easier and more appealing. I always prefer to build a square scene rather than crop because there are cool dimensions to be had that can't be done with crop (e.g if I'd shot this further away I would have been alot smaller in the frame and the effect not as cool)
Sometimes something just looks iffy in a picture. If i can get rid of it without it looking bizarre, I probably will. Who needs a roof?
Mist creates atmosphere, and separates the foreground from the background. In this case, my background is an ugly set of buildings where I live (no offence mum and dad) so I wanted them to be as magical & inconspicuous as possible.
The theme of excess is one of my favourites. Add multiple ANYTHING to a picture and it's bound to be way more interesting, especially if it's a pretty big size. Plus the shapes of umbrellas like this is lovely, and works brilliantly in the composition - circles!
Sometimes angles in the body & expression are way more important. A prettier pic (like the final one in the outtake) would have flattered my ego, sure, but didn't work with the atmosphere in the shot and was abit blank. Plus I like the crooked angle of my arm within the circles.
I was originally going to title this something about a circus or a freak show, but decided to go with Hideaway, so my freak growth spurt became irrelevant, but that's okay, because I'm playing a character in my shots. Plus I never get to be tall, so I will make the most of any oppurtunity!! ;)

Hope everyone enjoyed this Making Of :)
Posted by rosiehardy at 13:23 16 comments:

8am start, 11pm finish - no time for a creative self portrait: Behind the Scenes: All My Nightmares Escaped My Head

Around 5pm I headed up to the hills near my house - I wanted to catch the right lighting for this shot, and having shot in complete darkness before I had to make sure it was the twilight time between sunset and darkness so that my camera would focus and my ISO wouldn't have to be too sky high!

Lucky me, I got to watch the sunset: (iPhone pic) apparently it takes a really long time for the sun to set, so after numerous bouts of pins and needles and losing all feeling in my rear, the sun had finally gone done and my little town was cast into shade: (iPhone pic) I didn't use any lighting for this shot, just a tripod and a IR (infra-red) remote.

I shot this with my 50mm 1.4, at 1.4f, at 3200 ISO and 1/400 shutter speed. The reason I chose to compensate with my ISO rather than shutter speed was mainly for the hair - movement is a huge aspect in creating atmosphere within a shot, and I didn't want my hair to be blurry in the wind. Plus I got a soft spot for grain ;) All the post processing was done on GIMP. Colours were not changed, just brightened the image and adjusted the black tones. The smoke was actually created using this image: I took this yesterday of a smoke bomb going off, I then selected the areas I wanted to use, and used the "screen" layer to create realistic looking fog. Then I took some nice fun ones just incase my other didn't work out!

What a long day, SUPER fun concept for tomorrow's shoot!
Posted by rosiehardy at 14:14 12 comments:

Right now, it feels like there's not all much else to me.
My back hurts abit and I'm on a whole ton load of medication, but that's about it right now.

here comes that feeling you thought you'd forgotten - Burn Out.

These days I'm starting to wonder if there's anything to me other than photography. I mean is there? I see everything around me as a freakin' photo possibility - every time I walk down the street, everything I see, I think

"Possible photo location? possible prop? What could I do there? How could I make that perfect? How would a better photographer interpret that? What would that look like on film? Why doesn't real life look like I want it to? Why can't I photograph what I see in my head? "

It's consuming my life. Sometimes I feel crazy. Infact, the times I feel crazy are the only times I'm not doing bizarre things. The bizarre things that keep me sane are the only things I feel like I can keep to myself and not share with ANYONE so that I have something genuine that I'm not doing to exploit for an idea that doesn't even ever get born because my eyes are failing my hands.

I think what I'm trying to say is, I feel like I've lost myself. Rosie the Person has been engulfed by Rosie Hardy: Photographer. And I'm starting to miss myself, which is just ridiculous.

I have too much work to do to take a break, too many people relying on me to stop and find myself. But the worst thing is - Rosie Hardy: Photographer is my entire bank of creative input, everything I've seen that's influenced my eyes so far. And it feels like in order for me to feel like myself again, I need to start taking those photos which take a little piece of my mind with them out into the world. And I don't know how to do that without my little bank of creativity.

I'm not entirely sure why I'm writing this, but I have this crazy feeling like I'm being tipped 40 degrees or so while I type, do you ever get that feeling? It's pretty cool.

Ugh, so this is Rosie Hardy: Photographer, feeling sick of herself and feeling down.

My 20th Birthday and a big fat thankyou!

Today was beyond wonderful. Today I received so many messages of love, support, friendship and kindness I didn't know what to do with myself.
I got cards from friends and family - and one postcard from Andy Billman, a flickr friend who attended one of my workshops in London. As soon as I read the first few lines, I BURST into floods of tears and had to have my mum read it out to me. I can't explain how lucky I feel today to be surrounded by so much love, and be surrounded by so many kind-hearted, warm friendly people on the web. 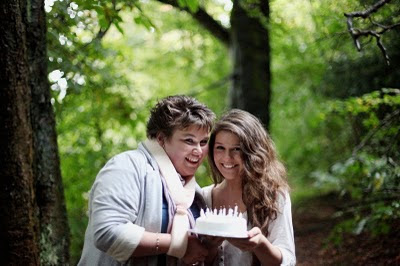 This is my old friend Amber and I! She came along with me today while I took some self portraits in the woods. Amber has been there for me every step of the way - when I came back from America feeling hopeless and lonely, she picked me up, took me out and talked all my fears away. I love Amber to pieces, she is one of the wonderful people in this world who truly are special. Now for the serious stuff :P

This past year has been the hardest one of my life. From moving out to a different country, complete and utter disappointment in myself and experiencing some pretty darn horrible feelings, then finding myself working and photographing Maroon 5 and on a billboard in Times Sq, NYC, it's been pretty unbelievable.
This time last year I was sat outside a motel, in a car park, crying to myself. I felt completely lonely, completely lost and ashamed of the person I was. 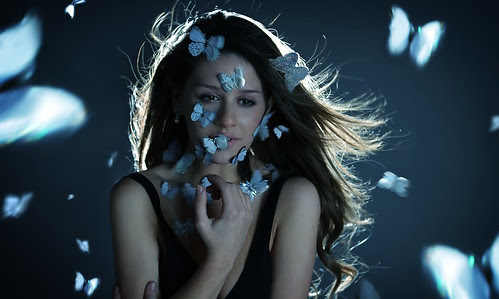 This time last year a woman walked past me walking her dog, stopped and gave me a hug. She asked me what was wrong, and took me back to her motel room where her entire family embraced me, hugged me and talked it out with me. Complete and utter strangers - that night they became my family.

Today I got to spend the day with my family, both offline and online. My faith in humanity as a whole has been restored time and time again by the people I have met in my life.

I have a bad habit of being really really hard to get hold of, with everyone - my friends in real life always give me so much support and so often I don't find the time to tell them how much I appreciate it. So for every facebook wall comment I got, I wrote to each person and thanked them.

Amber sneakily snapped these shots of me when I got some happy birthday texts earlier :) And I want to say thank you to everyone online who has supported me and my photography this past year - seriously guys, I wouldn't have come this far without any of you.

You guys are just so wonderful. For a person to take the time out of their day to say something nice to me, or give me advice, or just say hello - it just makes me realize how wonderful people are. And it inspires me and it motivates me to do the same to the people I encounter in my life. And to help people in my situation - whether it be photographically, or with relationships, or loneliness, or alopecia, anything.

So this is just a big thank you, from me to you and anyone who has ever been kind to anyone without want or gain. I can only hope that I can become as wonderful a person as you all are. 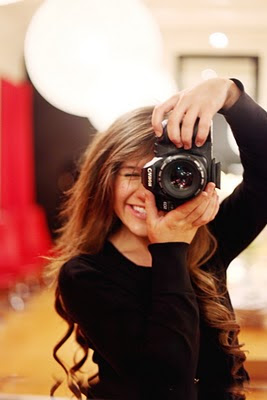