Behind the Scenes: The Adventures of Emily in October 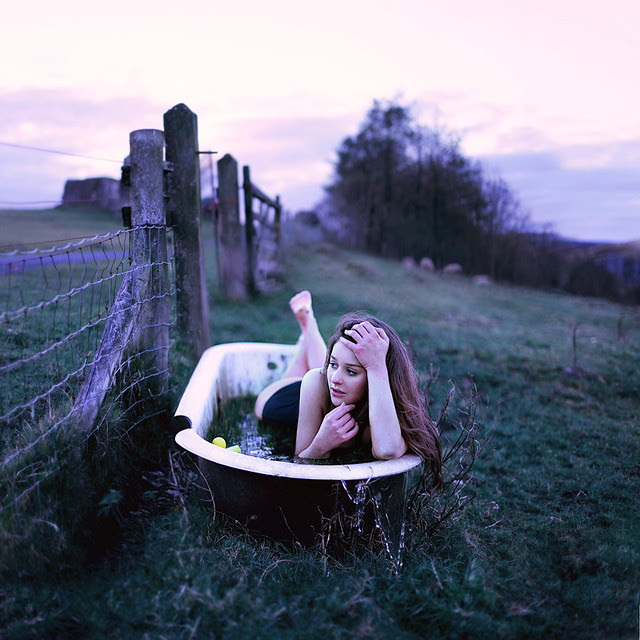 One of the stupidest and coldest things I have ever done in my life! But great fun, none-the-less!

Kane and I set off today for a photo day! Getting there proved to be the biggest obstacle, however. After about 30mins of prodding, shoving and dismantling of wheels, I had just about given up trying to fit my prop plane into my Beetle. Then I remembered I have a soft top roof which comes down, we strapped it in and away we flew. Kane wanted to shoot some footage for his media coursework (a music video) and I lended myself + props + plane for the job. Here are some fun screenshots I took: After Kane had done shooting, and I was FREEZING, I decided to proceed with the shot I had in mind. I'd come the day before and seen this bath which was covered in ice in the middle of the field. The thing that I liked most of all was the grass growing out of it, so I did a quick mock up when I got home based on this shot I took: About to get in: I got in 3 times. I always like to check my shots to see if they're coming out how I want them to, the shots with me to the back of the bath just looked odd, as there was icey soil at the bottom of the tub so I wasn't as submerged as I wanted to be.

Instead I switched it around and lay on my front. Here's the whole concept coming to life from mock up to final shot: The worst thing was that afterwards, we had to drive home in the freezing cold with the ROOF DOWN on the car. I drove back in my dressing gown, much to the amusement of other drivers!

One thing I've learned since taking up photography, is that if you aren't willing to really put yourself out there to get a shot, then the shot is most likely not going to be very interesting. Sometimes you just have to man up and get in the tub.

Have a great evening everyone!