Here's a quick before/during/after of this shot: 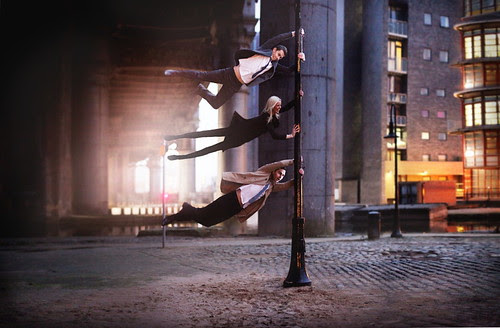 these are just screen shots taken on my iphone, sorry for the bad quality! As you can see, this is a composite - which was relatively straight forward with the guys (they literally flung themselves at the lampost!) but harder with Claire - flinging wasn't too much of an option (though she did have a go, brilliant!) so instead we took some shots of her being held up by Martin, though I did have a problem with the legs as I was going to use a different shot of her head/arms, but I really should have taken shots of her legs at different angles. Not too much of a biggie though! :)

Lighting wise I enhanced the light behind them under the bridge using a big old "lightball" as I like to call it, which I made on GIMP, and layered it "screen" and adjusted the colour curves and opacity afterwards. For me when I'm editing I work in sections both on screen and in my head - so when I'm shooting on camera, i'm only looking for sections of a photo to look good so that i can comp them in later!

This was shot with my 50mm 1.4 on my 5D mkii. It was pretty dark out and my settings were terrible, I think I was at about 1/80 (with flinging involved = bad bad bad) at 1.4 (trying to focus during flinging = awful awful awful) and at 6400 ISO (hideous). But i think it came together pretty damn well!

Hope this helps and of course hope you like it :) Happy Wednesday!
Posted by rosiehardy at 07:24